Do you enjoy singing?

Find us via our banner on demonstrations.

Raised Voices is a political choir based in North London.
We sing for peace, justice and the environment, against militarism, capitalism, racism and sexism.
We also sing to raise money for various campaigns, at political events and on demonstrations, often with other choirs, as well as at festivals and at parties.

See the About Us page to find out more about the choir.
Raised Voices welcomes singers of all abilities.

We are still rehearsing online, due to coronavirus. See our Contact Us page for our email address. 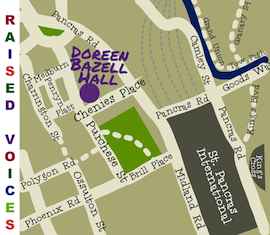 More information can be found on the Contact Us page.


Raised Voices at the Extinction Rebellion

Watch Raised Voices sing in support of Extinction Rebellion in London in April 2019.

American Public Media podcast Marketplace reports on Raised Voices at the Put It To The People march. 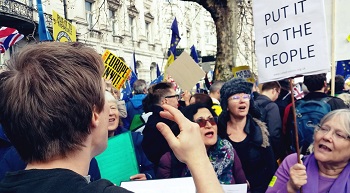 Many of you who knew Cynthia Cockburn will have heard the sad news that Cynthia died on 12th September 2019. She was a very long-term member of Raised Voices and was instrumental in setting up Campaign Choirs Network. She contributed a huge amount to Raised Voices, including the words of more than 20 songs. We are missing her very much. She was a strong feminist and radical thinker, campaigner, writer, photographer, with a great interest in birds and nature, and a warm friend to so many people.

Raised Voices held our memorial to Cynthia on 7th March 2020, at which we performed some of Cynthia’s songs, and taught others of her songs and rounds to everyone there so that we could all sing them together. We were delighted that many of our past members, other singers, and Cynthia’s family and friends were able to join us. Everyone there enjoyed the memorial, and as a participant said, “it was moving and fun and just lovely!”.
Photos and videos of the event can be seen here.

The tribute site on the Campaign Choirs website, and the Guardian obituary, are still available if you haven’t seen them yet.

* more photos, videos and news about